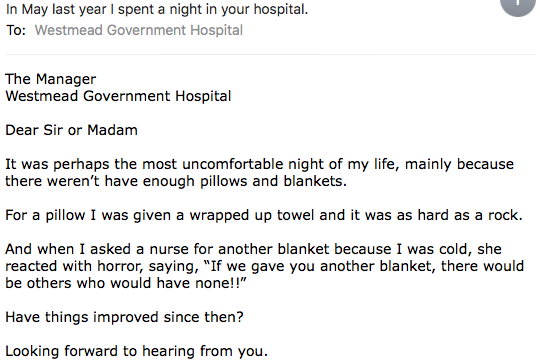 We received a response by email the next working day!!!

Bit by bit the world is changing! – we don’t think this would have happened even two years ago.

The content of the response was not as good as it could have been, in fact it was of no help at all! But at least, if you’re dealing with an organisation that has an ordinary email address, and you use it to raise concerns you may have about your experiences in dealing with the organisation or any of it’s people, and you get a prompt reply in writing, not a phone call, there may be some hope that your concerns may be addressed one day. We have constantly found that with organisations that are not that, the chances of your concerns ever being addressed are nil, all things being equal they are not worth bothering with.

As an illustration – not in the health care field, but still relevant.

Some years ago one of our readers says that he had this experience with Bunnings Warehouse. Bunnings would spend millions and millions of dollars on advertising, trying to project an image of being good to deal with, but our reader says that he bought something from one of their stores which turned out to be quite defective in a fairly significant way, and when he took it back, the fairly senior person he complained to initially was quite objectionable, almost abusing our reader, telling him it was his fault for not checking the product properly before he took it home!!! And when he  used their email form to follow up on his complaint, it soon became evident that there was no one within Bunnings who was used to dealing with complaints, and that the last thing that was going to happen was that there would be any apology for what he’d bought being defective and for the objectionable attitude of the senior person he’d made his complaint to. As we say, this happened some years ago, but we have just checked their website, and we can’t begin to describe how unfriendly it comes over as, if you want to make a complaint.