On the face of it, from what we’ve reported in previous posts on this subject, a person called an ambulance when he was having a severe dizziness attack, mainly to try and find out what was causing it, and after spending a night in hospital and making visits to the hospital over the next ten days for various tests and consultations, the advice he got was completely wrong! He was told that they had “discovered the problem” – it was because his heart was pausing, missing beats, for 2 or 3 seconds, when this doesn’t make any sense at all, when, in all likelihood, the cause was Vertigo.

This letter has been sent by “snail mail” to the PO box of the Cardiologist who delivered the final verdict – he doesn’t have an email address. 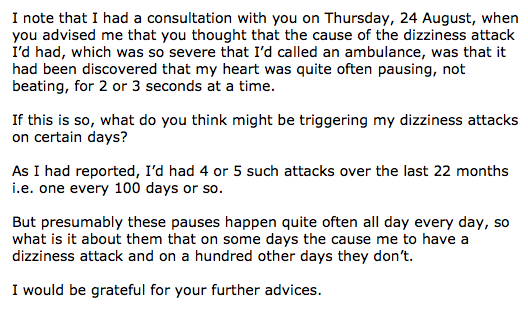 We’ll let you know if we get an answer. We’re not expecting one as we don’t believe there is an answer to the question we’ve raised.

This entry was posted in Treatment for dizziness attacks. Bookmark the permalink.