In relation to this, the NSW Health Care Complaints Commission is supposed to regulate the NSW health care people, in particular Medical Practitioners. Perhaps one way of putting this is to say that it’s supposed to help us in avoiding those who are not the best.

So how are Commissioner Sue Dawson and her people going with this?

They report on the work they have done in Media Releases that appear on their website from time to time – we can view these media releases by using this link.

So, when, according to it’s own figures, the HCCC receives over 200 complaints about doctors a month, it’s only found two, in these two months, at least, who perhaps are not the best, who perhaps we should avoid?

We’ve done this exercise SO many times in the last 12 years, and it’s always been the same – out of  more than 1500 complaints about doctors they receive every year, lately more than 2,000, they never find even as many as 20 a year to have done not a very good job, and often, many of these 20 have ceased practicing medicine anyway, and any misconduct the decisions are based on, happened 3-5 years ago. If anything, things seem to be getting worse, not better.

So there you are readers, hasn’t the HCCC been helpful, such a worthwhile organisation,  they’ve located 2 doctors in the last two months who we should perhaps avoid – and the other 398 about people have taken the time and trouble to complain, (goodnesses knows how many haven’t bothered,) have been passed as OK.

If these facts don’t convince us that we have to do our own research on which doctors we should be consulting, and that the HCCC is completely and utterly useless in helping with this, we’re not sure what will. 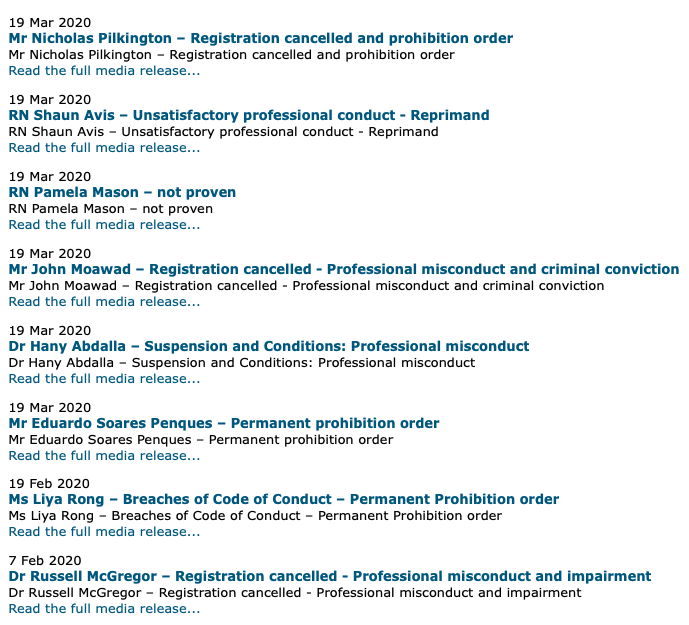 To make a comment, ask a question, or to join our mailing lists, email us at info@questionsmisc.info.