This 1 Jan 2018 article in the Sydney Morning Herald tells a story which we find SO SO funny.

Briefly, a Matt Dooley, after being signed up for over 4 months to get the NBN through Telstra, and having spent over 100 hours during those 4 months talking to them on the phone trying to get it working, decided a sit in in a Telstra Store might work. And when Telstra called the Police to have him removed – no mention of them trying to resolve his problems – lo and behold:-

Further quotes from this article. 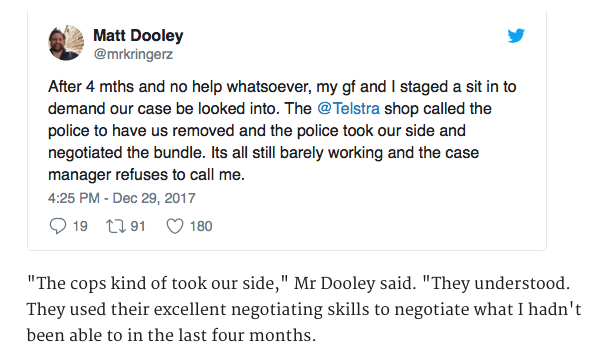 Note the comment: “It’s all still barely working and the case manager refuses to call me.”

To us, the most amazing thing about this story is that anyone ever starts dealing with Telstra, let alone keeps trying to deal with them. Spending 100 hours on the phone to them and getting nowhere is just normal Telstra, and has been for more than 50 years. Of course, it’s a matter of competition – but hopefully there are other organisations that are better to deal with than them when it comes to getting connected to the NBN.