Today, on 4 July, 2020, an attempt was made to send Premier Berejiklian this letter, using the email form on her website:- 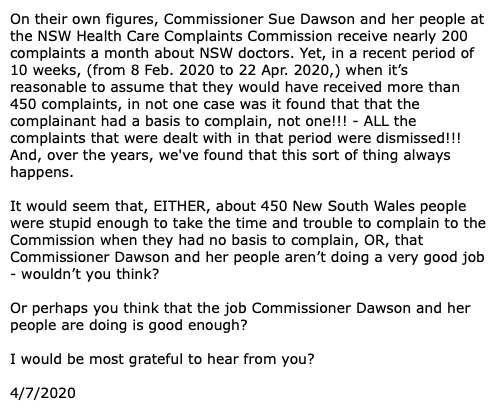 When we say “an attempt was made,” actually 3 attempts were made, despite her email form being incredibly cumbersome and complicated – it took at least half an hour – and we still couldn’t get anything that indicated clearly that she had received the letter. The best we could get, which may or may not indicate that it had been submitted successfully, was this:-

As per usual, with Premier Berejiklian and her people, they say that responses won’t be provided unless you provide your full contact details including your street address and telephone number. You can be raising an issue in which thousands and thousands of people are interested,  yet you still have to provide your street address!!!??? No doubt, some brain dead marketing person suggested that, if they did this, it would reduce the emails they got considerably, and they all said, “Oh yes! What a great idea!”

As a matter of interest, if you search to see how it is in other States, as an example, this is what comes up with Mark McGowan, Western Australia’s Premier:-

We’ll let you know if we get a response from Premier Berejiklian.

Commissioner Sue Dawson at the NSW Health Care Complaints Commission continues to say that 98% of the people who complain about NSW health care workers, mainly doctors, are eventually told that they have nothing to complain about, and deserve to be told they have nothing to complain about!!! (Do you think that’s likely, readers??? To us it’s an insult to you and me, the NSW people.) And assuming that Premier Berejiklian, as the “big boss,” is the most important person in deciding whether Dawson should keep her job or someone better is found, and has been for three and half years, since January 2017, to us it’s increasingly looking as though someone better could/should be found to take over Premier Berejiklian’s job.