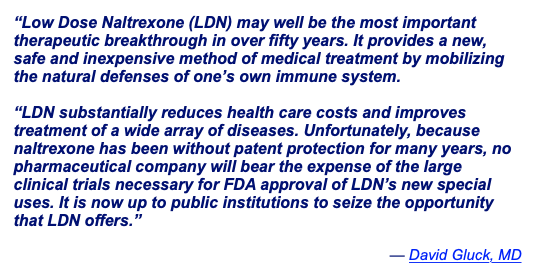 Others rave about it, claiming that it is the 5th most important medical breakthough in human history and perhaps the greatest.

But there’s a problem – hardly any doctors are advising on and/or prescribing it.

One of the most amazing/alarming/extraordinary claims we’ve ever read is that, on average, it takes 17 years for medical breakthroughs to become common practice!!! So there’s this factor, but there are others in relation to Low Dose Naltrexone.

Briefly, Naltrexone was first discovered in about 1965, and eventually, after about 20 years, FDA approval was obtained for it to treat certain addictions in 50 mg doses. But it was only after about 1985 that it started to be discovered how effective it was in treating a whole range of medical problems, because it strengthens the body’s own capabilities to deal with medical problems. (Incidentally, there’s no such thing as “Low Dose Naltrexone” – the use of the term means taking Naltrexone in low doses.)

But doctors are only used to advising on and prescribing medications that have FDA approval, but, as the quotation above refers to, getting FDA approval usually involves lots and lots of testing, costing lots of money, but it’s worthwhile for the Pharmaceutical companies to get involved in this, as at the end, they can take out patents that give them a monopoly on the particular medication’s production and sale for 20 years. But the patents on Naltrexone have already run out, so it’s unlikely that taking Naltrexone in low doses will ever get FDA approval.

So that’s the first problem in trying to find a doctor who will advise on and prescribe LDN.

And a third is that easily the most important LDN feature is that, not only can it help with existing medical problems, but that it provides PREVENTION against developing further medical problems, and doctors are not used to prescribing medication for their prevention qualities.

We feel we could write a book on LDN – email us at info@questionsmisc.info with any questions you may have and we MAY be able to help you, but it’s probably best if you go to the www.lowdosenaltrexone.org website, using the ordinary email address, info@lowdosenaltrexone.org.

Unfortunately, in terms of the quotation at the top of this post, there seems to be precious little evidence of “public institutions” seizing “the opportunity that LDN offers.” Of course, there are huge vested interests, particular the big pharmaceutical companies and the private hospitals which want there to be more sick people, not less. What if the wide spread use of LDN could reduce the number of sick people in the world by even 10%??? And there are this who are saying it could bring about reductions of much more than 10%???