Hopeless “people decisions” being made within the Berejiklian Government 3

To summarise what we’ve set out in this previous post.

A committee of Parliamentarians exists, (we’re not sure when it was set up,) called the Joint Parliamentary Committee on the NSW Health Care Complaints Commission. 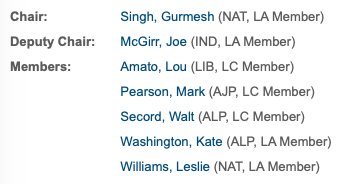 In Mr Singh’s own words, “The role of the Committee, as set out in the Health Care Complaints Act 1993, is to monitor and review the HCCC’s overall performance.”

BUT, it appears that there’s no way that the people of NSW can get letters to him complaining about the HCCC’s record in dealing with complaints about health care workers, particularly doctors, and that this is on Mr Singh’s orders!!! – it appears he doesn’t want to be bothered with such letters, doesn’t want to be expected to lift a finger to take any action about the HCCC’s record, which, of course is atrocious..

To us, this makes the making Mr Singh the Chair of this committee a hopeless “people decision” – and if it was made while Ms Berejiklian has been the Premier, it just another example of a hopeless “people decision” being made within the Berejiklian Government. And, if by chance, Mr Singh was made the Chair before Ms Berejiklian was appointed as the Premier in January, 2017, and she’s done nothing about it in three and a half years, it almost makes it worse. And, if facts like the above are presented to Ms Berejiklian and her people – we are certainly going to be sending her a copy of this post, we’ll let you know if we get a reply – and still nothing is done, that’s worse again!!!