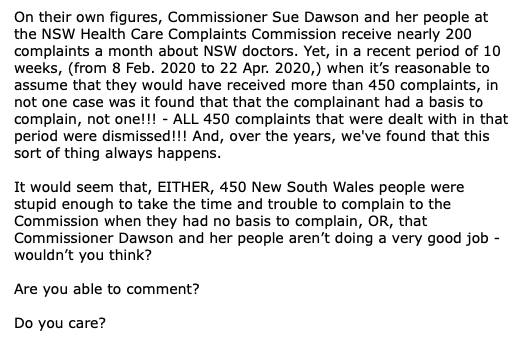 Three to five days later, we got an Australia Post “snail mail” letter, (why on earth a “snail mail” letter in this day and age, we can’t imagine!!!???) consisting of four two line paragraphs, advising “I have written to the office of The Hon Brad Hazzard, Minister for Health and Medical Research on your behalf,” AND, “Please be advised that a response may take several weeks to complete!!!???”

In so many ways this simple letter tells us so much.

Firstly, with Commissioner Dawson admitting that 98% of the more than 550 NSW people a month who complain about NSW health care workers, mainly doctors, are eventually told they have nothing to complain about, which, as we keep saying, seems to us to be an insult to the people of NSW, Lee provides nothing to indicate that he, himself, cares in the slightest – he just ignore the questions, “Are you able to comment? and “Do you care!!!???”

Secondly, it confirms what we’re always finding with the Berejiklian government at every level, and that is that the people in it simply refuse to go to the trouble and expense of having people available to provide responses of any quality, if at all, to people who write expressing concerns, us, you and me, within reasonable timeframes. (We live for the days when governments only get elected if they do.) We think that, that the best response Lee can provide is that he’s sent the letter he’s received expressing concerns off to someone who will take “several weeks to complete” anything, is completely bizarre!

Thirdly, from our experience, it’s hard to think of anyone worse than Brad Hazzard to be counted on to respond to the concerns raised. Amongst other things, we once got a letter from one of his people – which we’ve been trying to find but can’t, so far – which would be the worst letter we’ve ever got from anyone, but it obviously met his standards.

Fourthly, to us, the performance of Sue Dawson at the HCCC, or lack of it, is a matter of huge concern to the people of NSW, us, you and me, and if your local member of the State Parliament, having decided that he doesn’t care about it, thinks that the best he can do about it is pass your concerns on to Minister Hazzard, of all people, it makes you wonder to whom else you can turn!!!??? – this, on top of the fact that Gladys Berejiklian, who we would imagine would be the one who makes the ultimate decisions on these matters, has gone along with Dawson’s performance since she became Premier three and a half years ago!!!???

Links to this post have just, on 13/7/2020, to Premier Berejiklian and Geoff Lee. For Ms Berejiklian, we’ve used the ordinary email address “willoughby@parliament.nsw.gov.au.” We’ve found the email form, laughingly called, “Contact the Premier,” IMPOSSIBLE to use. If the people who receive it can’t be bothered passing it on to her, that’s her problem.

We’re always interested in other peoples’ version of things. We’ll let you know if we receive any responses.