In these days, when modern methods of communication make it so easy to check claims by doctors and others as to their qualifications, one would think that only those who were not very bright would make false claims. (Or perhaps it’s our fault – perhaps they think we’ll believe anything they say? And perhaps they’re mainly right?) Dr Hodgkinson may perhaps be one of these – in fact he may be a repeat offender.

Some years ago, we checked one of his claims on his website, and it turned out to be ridiculously false. 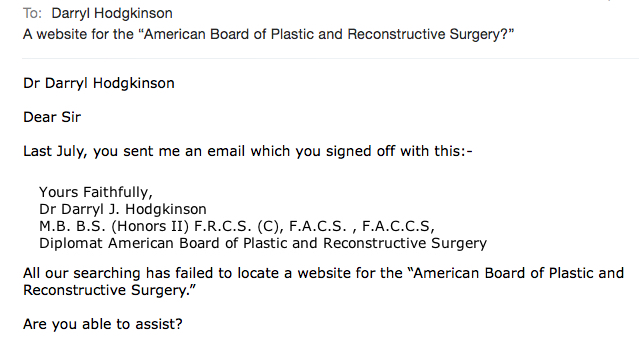 Perhaps we’re wrong – we’ll let you know. As you know, it’s our strict policy to always try and let everybody have their say.

A 7 Apr 2015 update: It’s starting to be very obvious that the Darryl Hodgkinsons of this world haven’t yet realised that the moment they have an email address they lose credibility with many if they don’t provide reasonable responses to reasonable emails sent to them.

For instance, if, as Dr Hodgkinson does, you claim to be “amongst an elite group of a very few surgeons to hold two degrees in plastic surgery from” organisations, which he then names, and, on the face of it, these two organisations don’t even exist, and you don’t respond to emails about this, like the one we sent him 8 days ago, your days of having a lot of credibility are probably long gone.

And if you claim to be on the Board of Censors of an organisation, as though this is some sort of reason why you and we should consult and use him, when one of the three others on this board, a Dr Colin Moore, a gentleman well into his 70s, has recently been found “guilty of unsatisfactory professional conduct” and ordered back to Med School for further training, after claims were accepted that one of his patients, after treatment by him, had to be taken to hospital by ambulance, and was only released after 13 days, after 4 operations – well, what can you say!!!

We haven’t emailed Dr Hodgkinson about this. You can if you wish. We can’t be bothered.

This entry was posted in Breast Augmentation Surgeons. Bookmark the permalink.