If you go to this hospital’s website, you read, “After 75 years of outstanding service, Concord Hospital enjoys a well-earned reputation for excellence in providing healthcare.”

This despite the fact that a 13 year boy who had been so dreadfully sick that he’d been admitted into it’s emergency at 6.55 pm one evening, (on the 9 Aug 2014,) was discharged, less than 8 hours later, even though it was 2.20 am in the morning!!! no less sick, perhaps more so, only to be dead within a further 12 hours – see this Sydney Morning Herald article.

Notwithstanding that, as he was being “kicked out,” he was so sick that he couldn’t walk to his parent’s car,  – he had to be wheeled in a wheel chair – were any of the hospital staff concerned? Apparently not! Apparently not!

So what did the Coroner think of all this? Her recommendation – that “Concord Hospital pay more attention to parents’ concerns.” This would tend to indicate, although it’s not entirely clear, that the parents expressed concerns, but that no attention was paid to them.

In such circumstances, perhaps the parents could have sent an email expressing their concerns to perhaps even the CEO of the hospital, or someone – it would only have taken 5 or 10 minutes. But we all know that hospitals avoid emails and emailing like the plague – it makes their people too responsible.

If you don’t believe us. 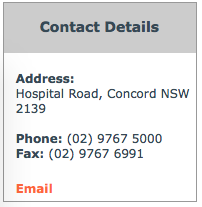 But if you click on the “Email” shown, you are taken to an email address that doesn’t work!

And the same page has on it:-

But if you click on “by clicking here,” you are only taken to the same email address that doesn’t work.

That’s the world we live in readers.