In 2014, as was widely reported, a couple went to the Fairfield Government hospital for help in having a baby and got none – they had to try and deliver the baby themselves, and the baby died.

It would seem obvious that, at the time, under the management of the hospital’s CEO at the time, that everything else in the hospital had a higher priority than helping a couple have their baby – which, to us, amounts to criminal negligence for which people have gone to gaol for less.

(In what we think is one of the greatest scandals we’ve ever come across, some headlines indicated that the findings of the Coroner, who looked into the death of the baby concerned, amounted to, “Cheer up everyone, the baby would have died anyway!” It’s true that we’ve never had the time to read the Coroner’s findings in full – perhaps one of our readers could do it, and let us know all about it – but we suspect that nothing would have been found about any shortcomings in the hospital’s care and management???)

Over the years we’ve sent various letters to the Fairfield hospital’s management asking if anything has changed – which haven’t even been acknowledged, let alone been responded to, of course!

But what has always been of even greater concern, to us, is whether, in the whole western suburbs of Sydney there’s a Government hospital that GUARANTEES that, if couples come to it for help in having a baby, they won’t end up having to deliver the baby themselves? And we’ve sought to raise this issue with various people, amongst them Minister Hazzard, and when we raised it with him, we got this letter from an Elizabeth Koff, writing on his behalf. 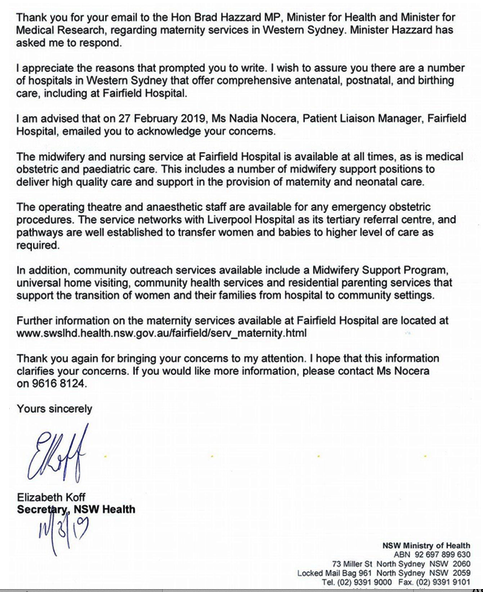 We’re always saying that this is the worst letter we’ve ever received from anyone in our whole life! All airy fairy rubbish that doesn’t address the concerns raised in any way?

We’re always saying that finding what people are like is kindergarten stuff these days – just send them an email. “By their emails ye shall know them.” And, to us, the fact that Minister Hazzard obviously deemed this letter good enough, as a response, tells us SO much about him.

And now, guess what readers!!!

When a letter was emailed to Geoff Lee MP, expressing concerns about the performance of Sue Dawson, the NSW Health Care Complaints Commissioner, he replied, “I have written to the office of The Hon Brad Hazzard MP, Minister for Health and Medical Research on your behalf.” AND added, “Please be advised that a response may take several weeks to complete!!!” (Nothing about whether the matter was of any concern to Mr Lee himself???!!!)

When a letter was emailed to Premier Berejiklian, expressing concerns about the performance of Sue Dawson, a Gabrielle Upton, MP, writing on her behalf, provided this in reply:-

(Nothing about whether the matter was of any concern to Premier Berejiklian herself???!!!”)

We keep going on and on about this – under Commissioner Dawson, NSW health care workers, doctors, in particular, feel that they can get away with anything, almost literally, murder, because they can – because they know that no matter what they do and say, if a complaint is made to Dawson and her people what they do and say, the chances of it not being dismissed as having no basis are virtually nil. Their investigative skills are certainly nil. And now we find that the issue, at least, primarily, is in the hands of Minister Hazzard, with Premier Berejiklian and members of Parliament like Geoff Lee, not letting on as to whether they have any concerns about the matter.

Over the more than 12 years that we’ve been working on finding the best NSW health care workers, and avoiding the ones who may not be the best, for ourselves and our readers, we’ve learnt about various readers making various complaints about doctors to Ms Dawson and her people, only to find that they’re geniuses as coming up reasons, often quite unbelievable, for saying the complaints have no proper basis. And we’ve only realised recently that the biggest factor in the situation is that someone better than Dawson has to be found to head up the HCCC

We’ll let you know if we ever hear from Minister Hazzard.