Another more than 10 weeks, (from 8 Feb. 2020 to today, the 22 Apr. 2020,) during which Sue Dawson and her people in the NSW Health Care Complaints Commission received more than 450 complaints from us, the people, about Medical Practitioners, (on their own figures – they say they received 2,377 in 2018-2019,) not one was found guilty of providing inadequate treatment and/or care – not one!

Only one was found guilty of anything wrong – “inappropriate prescribing of opioids and other drugs.”

The other more than 449 were told, presumably, in one way or another, that they had nothing to complaint about!

Just as well parliamentarians Gurmesh Singh, Joe McGirr, Lou Amato, Mark Pearson, Walt Secord, Kate Washington, and Leslie Williams, on at Joint Parliamentary Committee on the NSW Health Care Complaints Commission, were “breathing down their necks,” or else they might not have found even one!

So, during a period of 10 weeks, over 450 people had taken the time and trouble to make a formal complaint to the HCCC in which they’d claimed that they’d received inadequate treatment and/or care from a particular doctor, and in EVERY case they were told they had nothing to complain about, that the matter had been referred to the Medical Council of NSW who had agreed, and where a review of this decision was sought nothing had changed, and the seven parliamentarian charged with supervising and reviewing the activities of the HCCC had though that this was OK. In other words, the doctors complained about ALWAYS had the last laugh, and, for the complainants, making a complaint to the HCCC had ALWAYS turned out to be nothing but a degrading experience.

Goodness knows how Sue Dawson fills in her day!

We keep being reminded of the Albert Einstein saying. 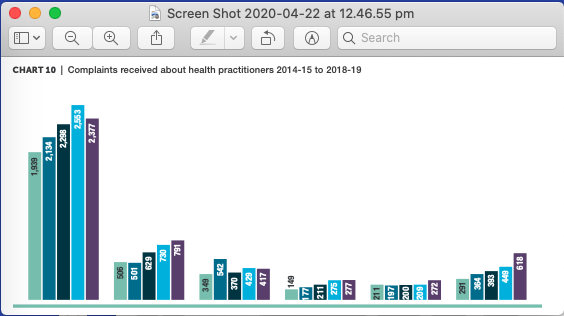