Sydney Morning Herald articles on the incident appeared on 30 and 30 Jan 2015 which you can read for yourself by using these links.

By a stroke of good fortune they were able to get Ms Rickhuss’s heart going again.

Of course, David Segal, the institute’ managing director was hung ho about everything – it was just one of those things. Here’s a quote from the first article:-

According to these articles, even Ms Rickhuss seemed gung ho about everything.

The issue, of course, is whether the person who administered the anaesthetics involved had the proper qualifications to do so – on which no information is available in the two SMH articles.

But then, on 17 Apr 2015, more than two and a half months later, a third SMH article on the incident appeared, authored by Anna Patty, a highly credentialed SMH journalist.

In general, this article puts a very different perspective on things, and lo and behold, David Segal has come up with this.

So there you are, no need to worry, “a senior consultant from St Vincent’s hospital,” (no name provided, of course,) “was present” who, admittedly, wasn’t mentioned in the first two articles – still nothing on the person who actually administered the anaesthetics involved!!!

This article led us to email a letter to Mr Segal, with a copy to Dr Eddy Dona, the supremo at the Cosmetic Institute, saying:- 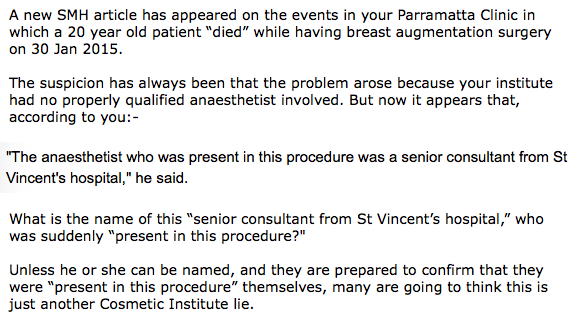 We’re not expecting a reply. We emailed  Mr Segal letters on 30 Jan and 7 Feb 2015 relating to this incident which haven’t even been acknowledged.

In the meantime, we would have hoped that those who might otherwise have been considering consulting and/or using anyone at the Cosmetic Institute, might be putting things on hold until there are more indications available than there seem to be at present that those in charge there are likely to be more upfront and honest – about any thing.

This entry was posted in Medical Practices, Hospitals, Foundations etc., The Cosmetic Institute. Bookmark the permalink.