On 4 July, 2020, this was sent to Ramsay Health Care, the owner and operator of many of the private hospitals in Sydney and the whole wide world, using the email form on their website.

(Readers can be taken to the HCCC’s media release on this by using this link.)

Amongst other things, when we attempted to send the same thing, we got this:-

So, after some fiddling around, we reduced the length of what we wanted to say, and sent it off, and we received this:- 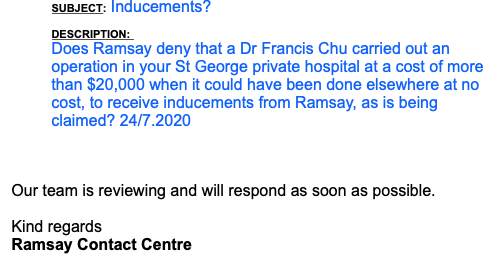 So it seems that Ramsay now has a “Contact Centre,” in which there’s a “team,” but, typical of sleazy organisations like Ramsay, the ordinary email address used to send us this  doesn’t work – it can’t be used to contact the team. Presumably, we still have to use use their email form to contact them, and anything that’s sent to them has to be “less than 250 characters long.”

Of course, we already know what the outcome of all this will be – Ramsay will strenuously deny that it offered Dr Chu any inducement to make sure his patient spent more than $20,000 in their hospital, unnecessarily, and Dr Chu will strenuously deny that he benefitted in any way from anyone, particularly from Ramsay, for having brought this about – even after he signed some of the paper work needed for the patient’s daughter to tap into her superannuation fund so it could be afforded. And, of course, wouldn’t you think, readers, that it would seem virtually certain, that Dr Chu would be lying in claiming that he did what he did for no reason at all??? and that this could have been easily uncovered if Ms Sue Dawson and her people at the HCCC had any investigative skills at all, which, of course, they haven’t, and that, if it was uncovered, Chu should be struck off for life and perhaps go to gaol?

We only did all this, in case any of our readers weren’t already aware of what Ramsay, the Dr Chu’s of this world, and Sue Dawson and her people, are like.

Sometimes readers, we can almost think we live in a rotten stinking world!