ANOTHER EXAMPLE OF MRS SKINNER’S FAILURE’S COSTING LIVES! AND NOT BEING HELD ACCOUNTABLE BY PREMIER BAIRD OR ANYONE!

We have just emailed this to Mrs Skinner:- 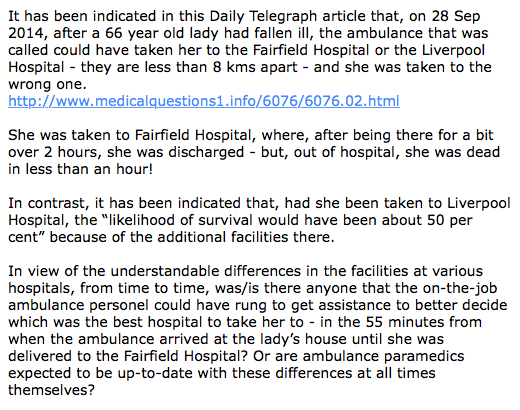 It is, of course, a stupid letter – because we already know the answer! There would be NO ONE on-the-job ambulance personnel could ring. There would be no one in the whole Baird government, least of all Mr Skinner, bright enough to come up with the idea of having a 24 hour, 7 day a week hotline managed by people who specialised in keeping absolutely up-to-date on which hospitals have which facilities, even though you would have thought that it would be kindergarten stuff that such people would have much better knowledge than on-the-job ambulance personnel.

Would anyone in the Baird government care, Mrs Skinner or anyone,  that people are dying because they’ve been taken to the wrong hospital? Not at all! Not at all!

They would be content with having those who enquire of ambulance spokeswomen being told, (unbelievably stupidly,) that patients are “ALWAYS” taken to the right hospitals – see this paragraph from the above mentioned article. Even in the face of the facts of one patient being taken to the wrong hospital, and it almost certainly costing her her life!

Or with the unbelievably incompetent Melinda Pavey expressing similar sentiments in this paragraph from a letter received from her only 11 days ago.

In a word, “They’re dreaming.”

A 23 Apr 2015 update: Not even an acknowledgement of our letter emailed to Mrs Skinner on 7 Apr 2015 – of course! One can only  wonder how may lives will be lost today as a result of ambulances taking people to the wrong hospital.