There was quite a lot of media coverage when Mr Ken Wyatt was appointed the Assistant Minister for Health in the Turnbull Government on 30 Sep 2015, because of his aboriginality. Unfortunately, he’s turned out to be completely and utterly useless – at least, in our experience.

A letter has just been sent to him by email, seeking his help, saying:- 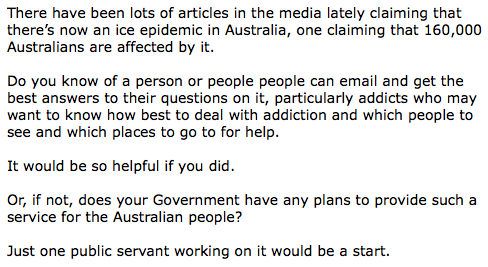 And we immediately got an “automatic reply” identical to the ones we got to letters we emailed him on 27 Sep 2015 and 28 Oct 2015, many months ago saying, “I will consider the matters you raise as soon as possible,” but I’m getting lots of emails, and, of course, I always consider emails from my electorate first, blah blah blah, blah blah blah!

To us, there are lots of things that are concerning about all this, but none more concerning than that it is clear that there is no one in the whole Turnbull Government considering the matters we’ve raised, (one of them, incredibly simple,) or if there are, neither Mr Wyatt, or anyone on his staff know who there are or where they are, so that our emails can be sent on to them for response.

This entry was posted in Information from the Turnbull government. Bookmark the permalink.