Something reminded us recently of the claims of one of our readers, that way back in June, 2008, after he’d made a complaint to Primary Health Care Limited, (now Healius,) that a doctor he’d seen in one of their centres had given him advice on 5 different matters and that all 5 advices were wrong, he’d got this response from Dr Edmund Bateman, Healius’s founder, (since deceased in 2015,) 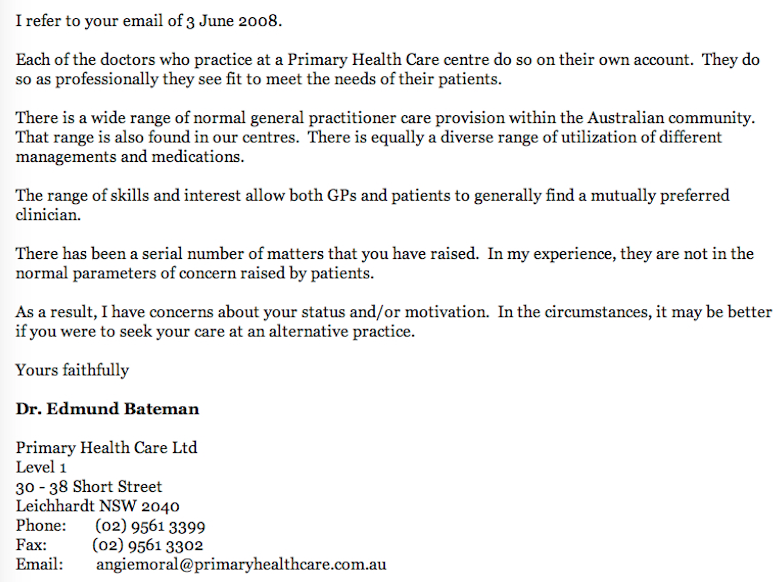 What an arrogant ignorant twerp he was!

And that our reader further claimed that, not only had Bateman told him to “p..s off,” he’d given orders to his lackeys, (Heil Hitler,) that if ever our reader was to visit any of it’s centres in the future, he was to be escorted from the premises, with “the police being called if necessary,” – our reader being a kindly old gentleman in his 70s! Further evidence of what an arrogant ignorant twerp he was.

Our reader says he only found this out, when some years later he saw the same doctor again, not to consult him on health matters, but to ask for his comments on what AHPRA was saying about him, and that when he found he wasn’t getting anywhere, he’d left – only to get an email the next day advising him that he’d been “ejected from their premises” and so on and so on, all black and white lies!

Of course, not only was Bateman an arrogant ignorant twerp, he was dumb and perhaps bad-tempered – surely he couldn’t have thought that letters like this would do the cause of his organisation any good, but he couldn’t resist carrying on like a Hitler like dictator, as presumably he was.

Of course, we’ve steered well clear of Healius, ourselves, ever since, and advised our readers to do the same.

We’d send Healius a copy of this post to give them the opportunity to provide their version of things, except that they don’t have an ordinary email address readily available, and we don’t have enough of our precious time to try and be in contact with people and organisations like this – as far as we’re concerned, people and organisation who don’t have an ordinary email address readily available may as well have up in big red letters somewhere, WE’RE NOT REALLY INTERESTED IN YOUR FEEDBACK, especially when they add, as is the case with Healius, “Please note that this process can take up to 30 working days depending on the subject matter of your feedback.” People and organisations who are interested in feedback are prepared to go to the trouble and expense of having more people on standby to provide responses to feedback than Healius clearly does.