Having said this, in the almost 10 years we have been working on blogs like this and websites, we can’t really remember one instance in which such interest has been shown.

Today, on 13 Oct 2017, an email was sent to one of the major Sydney Cardiology practices, saying:- 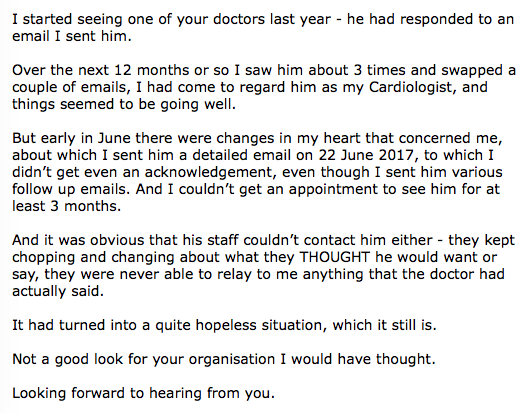 As you can see, it’s author claims to have been treated abominably by one of it’s doctors, and at least, in this instance, he has plenty of black and white evidence to back up his claims, which he wouldn’t have had if his dealings with the doctor and his staff had just been by way of face to face consultations and telephone calls.

Not that we think that this evidence will do him any good. Our past experiences suggest that this email won’t even be acknowledged. Will it be any different this time? We’ll see.

This entry was posted in Doctors and emails. Bookmark the permalink.