Back in 2014, a Mr and Mrs Amone went to the Fairfield Government hospital for help in having their baby, and got none – they had to try and deliver the baby themselves and the baby died. At the Coronial Inquiry into the baby’s death, Mr Amone testified that, when the baby started coming, he was shouting for help, but none came, until it was too late.

Use this link for more details we’ve set out on these events.

We subsequently sent a letter to Brad Hazzard, the Berejiklian Government’s Minister for Health, seeking to raise two issues.

(1) Has anything changed at the Fairfield hospital?

(2) Was there a government hospital in the whole western suburbs of Sydney that GUARANTEED that if couples went to it for help in having a baby that they would get it, that they wouldn’t have to try and deliver the baby themselves?

In response we got this letter from an Elizabeth Koff:- 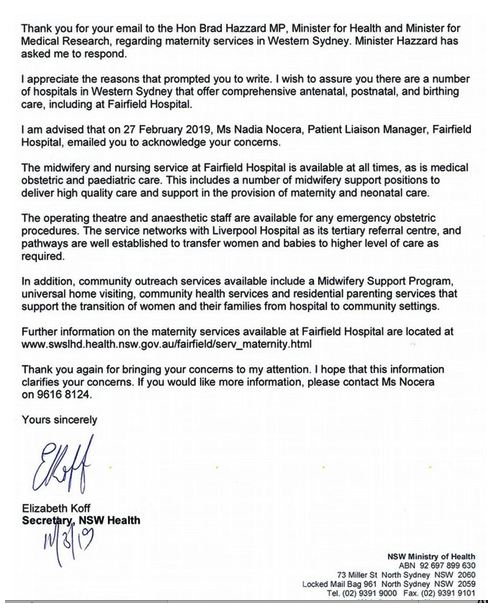 Ever since we got it, we’ve been saying that it was the worst most useless letter we’ve ever received – that you would expect more from school children, that anyone with any intelligence would be embarrassed to have their name associated with such rubbish!

But we’ve just learnt that Ms Koff is on a salary of $599,000 a year – at least according to this paragraph that’s up on the internet..

We’ve always said that the Berejiklian government has SUCH a poor record in it’s “people decisions” – who it appoints to what positions. And you couldn’t get a better illustration of this than that someone who writes letters like this in response to letters seeking to raise really important issues, is getting paid $599,000 a year.